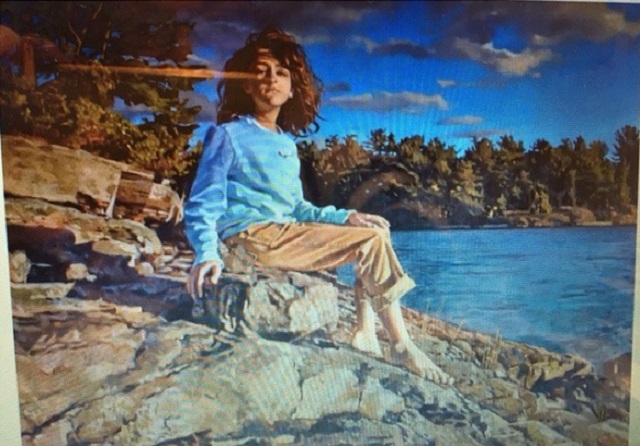 (Submitted by Carol Philp) John introduced himself as a ‘life-time painter’ as he remembers drawing and painting from a very early age.  Both parents, especially his mother, were involved in the arts. He graduated from Concordia in 1986 with a Bachelors Degree in Studio Art. Over the years he studied  with a number of artists including Robert Bourdeau, Marian Wagschal, Fay Fayerman, Landon Mackenzie and Jean McEwan. Influenced by many artists he was, for instance, introduced to Cezzan through Mary Pratt.  He was a muralist from approximately 1987- 2007 and only took up oil painting in 2014 going full-time in 2017

He then presented a number of his paintings and described in detail, each subject from a beautiful painting of a cottage neighbours’ daughter, ‘Young Women in Blue and Gold, to ‘Last of the 20th’ a painting of a now retired Toronto streetcar. His paintings are usually done from photos, but he has from time to time painted from live subjects.

After the break John commenced with his demonstration on mixing colour samples.  He explained the ‘Extended colour Palette of 6 pigments plus white and optionally black or burnt umber.  A basic palette would be 4 colours, one of each primary (Red, Yellow, Blue) + White. The Extended Palette comprises 7 or 8 colours; 2 of each primary, a cool and a warm version of each plus white and optionally a black or burnt umber.  He noted that the older acrylic paint dried darker, with the newer acrylic paint this is not as much of an issue.

He then went on to demonstrate his colour matching method: first select a pigment that is the closest match to the desired sample colour, use white or black/dark earth colours to darken, control the Hue and Temperature using mixes of warm and cool primaries.  To match colour, you must adjust the Hue, the Tonal Value, Tempeature and Intensity or Chroma.

John encouraged artists to join professional organizations (like the DVAC) for the support they offer members and the opportunity to display your work.

He continues painting and teaching painting at his studio:  Studio 756 at 756 Queen Street East.