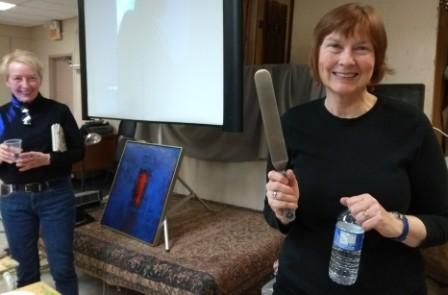 Janet Read does not work from plein air studies nor from photographs, but internalizes the landscape as she views it. Her color-saturated work has an aura of mystery.

Janet paints on canvas, board and Mylar (also called Dura-lar), using acrylic, oil. She is drawn to watery subjects. Her use of pouring medium allows her to reveal the layers of paint and light, and gives an impression of depth. Using large palette knives, the artist achieves structural effects by dragging the paint. There are many additional techniques that she uses. For example, to create a watercolor effect she scrapes top layers of paint to reveal the colors underneath, she uses a breyer or spatula to create structure, and she imbeds a drawing or other image into the painting.

Janet is experimental in her approach and believes that mistakes are opportunities for learning and advancing her art. She often paints with her surface resting on the floor, and makes sweeping movements to apply the paint, in what might be described as almost a dance-like movement.

One of the artists who has influenced Janet is Howard Hodgkin, the late British artist and printmaker.

Janet demonstrated some techniques for using pouring medium and promised to send to Don Valley Art Club members further information from Golden about the use of pouring medium.

For personal details about Janet Read, and her extensive career as an artist, writer and musician, see Janet’s website: https://www.janet-read.com.