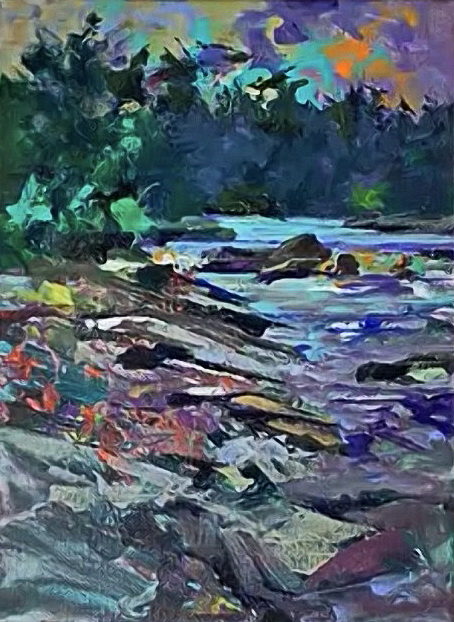 Using a reference photo (that he had shared with us during Part 1), Andrew began his painting demonstration, to an audience of over 70 members, some of whom painted along with him, by blocking in/sketching the main large shapes of his composition using a 1-inch sponge brush. He varied the colours to help define the main “blocks” and made some compositional adjustments such as moving his horizon line up from the mid-point of the reference photo.  Switching to smaller brushes he began to add colour such as teal for highlights and zinc white for translucency across the canvas.  After 10 min of painting, he had created depth, drawn lines for eye movement through the piece, and begun to define shapes such as trees. Specific shapes (rocks/trees) began to emerge in part due to what he placed beside and behind them.  As he painted, he made compositional changes as in larger rocks, and more water in the foreground. Next, he lightened the sky, then darkened it, and added greens in the distance.  All the while the image seemed to emerge from the canvas.  As Andrew painted, he punctuated his demo with explanations of colour choices, brush choices, and the use of palette knives to make some straight edge marks and for scraping into the existing paint.  He added some texture using paint-smeared cellophane that he gently applied to some canvas spots.  He told us, that as he paints, (and suggested we also consider) the effect we produce as not being right or wrong, but rather to think of our painting as a constant, continual process of assessment and adjustment, doing and revising, in order to move closer towards the vision we have of what we are trying to achieve.

As Andrew worked, it was fascinating to watch him paint details. With a few deft brushstrokes he detailed boulders in the distance, trees in the background, rocks on a stony beach. As he refined the water, his brushstrokes seemed to follow the movement of the water.  Andrew has some preferred paint colours:  Jenkins green and light purple for trees in the foreground, teal for highlights in the sky, Paynes grey and cobalt blue for highlights on the rocks.