Brian Harvey is a full-time oil painter living and working in Toronto. His paintings are studies of the commonplace and the typically mundane; everyday objects, interior spaces, and the urban landscape that surrounds him. Brian discussed his work and gave a short demonstration of his painting technique.

Brian starts with the darks first; he resists using whites at the beginning.  For his dark, he likes to use alizarin crimson and viridian green and adds solvent for the initial painting.  He is purposely messy with his initial underpainting … for a couple of reasons: i) serendipitous outcomes, and ii) so he won’t be tempted to ‘protect’ the painting.  He paints purposefully with his whole arm, not with just his hand. 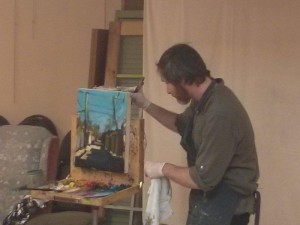