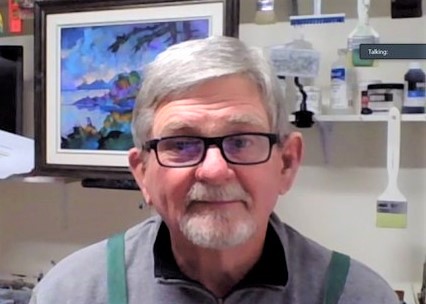 Brian Buckrell is a painter inspired by the Canadian landscape.  He started painting later in life after he retired from the University of Guelph as a professor of veterinary medicine.  His original artistic training was in portraiture and life drawing at the Jeffrey Watts Atelier in California and then in workshops with well-known artists such as landscape artist Robert Genn.  It was Genn who greatly influenced a more stylized technique and gave confidence to explore his own style, paint what he felt and not worry about being “correct”.  His studio and plein air work has won numerous awards and he is a member of the Society of Canadian Artists, the Federation of Canadian Artists and the Ontario Society of Artists.

Prior to the actual demo, Brian discussed some of his process in the studio.  He starts by selecting a reference image.  He uses ACDSee software to manipulate and edit the photo image, experimenting with tone and colour, and developing a value plan.  Art Rage software is used as a digital painting tool to efficiently explore the creative possibilities, simplify, minimize shapes and put in values.  Procreate was another creative software mentioned.  He talked about the ability and freedom to be creative without committing to canvas.

Brian began his demo with a black MDF board that had been prepared with black gesso.  An “underplan” was made using a white acrylic marker to outline the major shapes using the straight edges that characterize his stylized work.  Next he “bangs in” a thin layer of acrylic colour (Golden and Liquitex) to get a feel for the painting.  More layers were added to correct, experiment, showing no fear to change it from the original reference image.  There was no blending as layers were dry (aided by blow dryer) and colours overlapped.  Or he created an optical mixing effect by “tickling” paint with a light brush stroke.  Shape edges were defined by painting the negative object behind it using bold colour that goes beyond what was seen in the original image.  Colours and values were mixed to create a distinct foreground, mid and background in the painting.

In the end, Brian passed on some encouraging words to the DVAC group.  Art is more than just pushing around paint – there’s lots of philosophy, not just technique.  And it takes a long journey of experience (mileage) to do it.  Finally, as a mature artist, comfortable in his time and place, – “ If I’m not having fun, I’m not doing it!”

To learn more about Brian, his Zoom and in-person Workshops, see below.